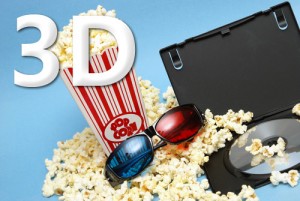 What can be better than watching a good movie? Watching a good movie in 3D! 3D movies help us to experience the atmosphere of the film better, to feel that we are a physical part of the plot and all the main characters are just a couple of feet away from us. Recently, 3D movies have become widely popular; that’s why each new released 3D movie becomes even more vivid and exciting to watch. No doubt that some of the most popular 3D movie genres are cartoons, horror, action and science fiction movies. However, it’s possible to find movies with 3D effects in any other genre. We viewed the most remarkable 3D movies regardless of their genre to create the list of the best 3D movies.

1. Avatar
When Avatar was released in 2009 it was a huge success. There was no-one who didn’t want to enjoy this iconic film in 3D. Indeed, the movie is beautifully made and all the sceneries of the Pandora world look so much better in three dimensions.

2. Life of Pi
Life of Pi is a marvelous story of a captivating sea journey of the main character Pi and a Bengal tiger. The 3D version of the movie lets you feel the sensation of being present on the boat with the characters and it’s definitely eye candy to watch.

3. Gravity
Gravity is an award-winning movie telling a story about two members of a space shuttle left in space. The view of space, the planets and stars look magnificent, and in a 3D way you have a feeling that you actually made a trip to outer space yourself.

4. Ice Age 3: Dawn of the Dinosaurs
Making a funny and a beautifully drawn cartoon is always a success, and if you add a 3D feature to such a movie, it’s impossible not to win everybody’s hearts with it. Ice Age 3 is the third part of the Ice Age series with the characters we all adore.

5. Jurassic World
Regardless of age, everybody would love to see dinosaurs, and Jurassic World offers you such an awesome opportunity. In this movie there’s wonderful nature, picturesque sceneries and a whole bunch of dinosaurs of different kinds to enjoy in 3D.

6. Pacific Rim
Pacific Rim is an action movie about a battle between huge robots piloted by humans and the ET sea monsters. With director as Guillermo del Toro, you’re guaranteed to enjoy plenty of astonishing scenes and surreal characters. The 3D effect will help you to feel you are the part of the counteraction in the movie.

7. Hugo
Hugo is a fairytale-like movie by Martin Scorsese with an amazing cast. The movie is filled with fantastic decorations, robotic mechanisms, and complicated clocks shown in 3D, which makes the atmosphere and spirit of the movie even more saturated.

9. Up
Up is a Pixar masterpiece by all means. It’s a really touching story about Russell the kid and Carl the grandpa trying to find a house that flew away. Up is definitely a movie for an audience of all ages to watch and enjoy, and 3D effects make it even more touching and sweet.

Watching a 3D movie will give you plenty of great emotions, for sure, since it’s not only a great plot that you’ll enjoying, but a wonderful picture in 3D that gives you the amazing feeling that you’re actually an integral part of the movie. If 3D movies are not your thing, take a look at the list of our favorite horror movies to watch.