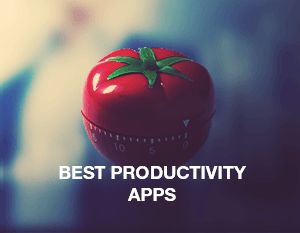 Getting through your work as a professional or student, or even just someone creating at home for fun, can be much easier with good productivity apps. There is such a broad range of applications that we debated how best to tackle a list of the 6 best productivity apps of 2018.
One thing was clear: there would be no singular productivity toolsfrom a sea of many. For example, Gmail is a fantastic email client, but it is probably not a favorite for all users, who may favor Yahoo, Outlook, or any other email service. So naming Gmail in this list would only stir unnecessary debate. This ethos extended to all productivity app types, be it word processors, spreadsheet editors, PDF readers, note taking apps, or anything else.
Instead, we decided to focus on productivity tools that are comprised of individual applications under one banner. Microsoft Office is a prime example of what we were looking for, but as you will see below, it is certainly not the only solution out there. We also looked at services offering something outside the norm, such as the interesting Noisli.

When it comes to productivity software, it is hard to look past Microsoft Office on any platform. The suite has been with us for three decades and is still the go-to solution for documents, spreadsheets, and presentations thanks to the Word, Excel, and PowerPoint applications. These days Office 365 is a cloud-based platform, but the core Office apps are also available on Windows, Mac, iOS, and Android.
Microsoft also has several other apps embedded in the suite. Outlook is the company’s email client, OneNote is a leading note taking app, and OneDrive is a cloud storage service. There are also several other productivity apps embedded in Office. Office apps are available to download individually, but fall under the same suite.
To use all Office apps uninhibited, you will need to pay for the 365 monthly subscription or for a one-off purchase of the suite. On mobile devices and Mac, the apps are free to download with limited features, but a purchase will be needed to unlock all tools.

Love what’s available on Microsoft Office but can’t or won’t pay for the apps? Well, OpenOffice could be the answer to your prayers for a robust productivity apps that gives Microsoft a run for its money. As the name suggests, OpenOffice is an open source “copy” of Microsoft Office which is completely free and gets most things right.
Available on Windows PCs, Mac, and Linux, OpenOffice has been around for decades and is a favorite amongst many for their productivity needs. Like its “inspiration,” OpenOffice features an excellent word processing app, a spreadsheet app, a draw solution, and other smaller services that closely mimic Microsoft’s efforts.
Of course, there are other reasons why being tied to Microsoft’s ecosystem is important to some, but again other users may not even care.

For many casual users, IFTTT may be a pointer to the future rather than a here and now application, but it is interesting nevertheless. The service is based on the idea that most of us waste a huge amount of time on the internet, computing, and mobile tasks that could be automated.
IFTTT features integrated applets that allow you to automate all kinds of aspects of your technology world. For example, if you want to automatically save images to the cloud, IFTTT will take care of it without you doing anything. Integration goes deeper, such as smart home automation, sending messages, recording notes, managing tasks, and much more.
This productivity software is also a community platform. Apart from the pre-included applets, it is possible to design and build your own automated tools – if you have the know-how. And that leads to the one current problem with IFTTT. At the moment, it is a power user’s dream and basically focuses on the tech savvy. Casual users may be put off or simply find no use for the applets.

Like Microsoft Office, Google Docs, Sheets, and Slides deliver free office programsthat can be downloaded and used separately on mobile and the web but are considered part of the same suite. Unlike Microsoft’s suite and more like OpenOffice, Google’s offerings are free to use.
One of the things Google Docs, Sheets, and Slides made popular in a truly functional way was the ability to work with other people in real time across an internet connection. You can join friends online and create and edit documents, spreadsheets, and presentations in a collaborative manner. We would argue this functionality still works better on Google’s apps than it does on rival productivity apps, including Office 365.
Of course, Google is also a leader in other aspects, such as search and translation. The company has seamlessly integrated those abilities into the productivity suite, making it a powerful resource. We love the apps for their simplicity and ease of use, but they do admittedly lack the whole functionality of Microsoft Office.

Noisli is something outside the norm and will not do any of your work for you, but it may just help you complete your tasks in a more efficient manner and make you feel better afterwards. The mobile, web, and desktop service is best described as a productivity companion as it produces relaxing sounds to help spur concentration and increase productivity.
The only reason we are listing this amongst the best productivity apps is because it simply works. Remove annoying noises and distractions from your work day to create a creative soundscape to help you concentrate. In terms of sounds, there are many available and it is possible to mix them and create your own for a personal audio tailored to your needs.
Among the sound selections are Rain, Thunderstorm, Wind, Forest, Leaves, Water Stream, Seaside, Water, Bonfire, Summer Night, Fan, Train, Coffee Shop, White Noise, Pink Noise, and Brown Noise. Admittedly, there is not a load of substance here, but Noisli proved to be an interesting experience and one we will continue to use.

For those of a certain vintage, Pocket was once known as Read It Later, and while the service has gone through some changes, the core theme remains the same. Pocket is the best offline article reader we have ever tested and is a fantastic solution for several needs. For example, users who need to keep working but know no internet connection will be available later can save articles offline.
Equally, procrastination is a real problem when working close to the internet; it is very easy to get lost down an online rabbit hole of articles. Instead of reading the latest sports or other distracting article now, you can use Pocket to save it for later.
Free and available on leading mobile platforms, desktops, and websites, Pocket is a very popular and functional app. However, while sharing facilities are available, Pocket does not let you share multiple items with other users or on social media.

As mentioned at the top of the article, basing a “best of” list on individual productivity apps in such a broad niche was next to impossible. Each sector of the productivity market can be assessed on its own, such as best calendar apps, best note takers, best task managers, and so on. Our list of mobile apps for getting back into the mood to work after the holidays might also be helpful – check it out on our blog.