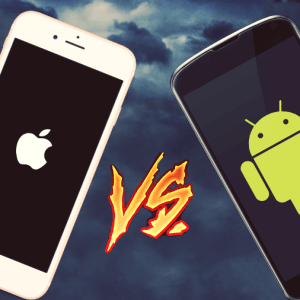 Lately, smartphone users are divided into two groups: Android supporters and iPhone worshipers. Not mentioning Windows phones, basically the majority of all users tend to have either an Android phone or an iPhone. The Android vs. iPhone battle is a pretty hot topic for all modern smartphone junkies. However, it’s impossible to select an absolute winner and to prove that one is better than the other. The point is to find what is better for you. We have shared our opinion considering the Android vs. iPhone rivalry to compare these smartphone types.

Personalization
It’s a widely known fact that Androids offer much more for personal customization than iPhones. iPhones offer a rather limited set of features and you can choose whether you want to use them or not, while Androids, from the beginning, offer more options with their advanced settings.

Variety of devices
There’s only one manufacturer of the devices that are compatible with iOS and that is Apple. Basically, you can select old models of the iPhone or new ones. Lately they are releasing iPhones in two sizes, whereas before they were adding a new model once a year. As for Android phones, you can select from a really wide range of smartphones of various manufacturers, prices, sizes, materials and hardware.

Charging
Starting from iPhone 5, the charger with which you should charge your iPhone has changed to a thinner one. If your iPhone model is lower than iPhone 5, you’ll need a different cable. If you have an Android, simply connect your smartphone with a micro-USB cable (which is also compatible with a huge number of other devices) and you’re good to go — no need to search for a specific cable.

Data management
Unless you jailbreak your iPhone, you can only process all your data through iTunes, whereas you can just connect an Android to any PC or laptop and manage your multimedia files easily. Along with that, you can take out your microSD card and insert a new one in case you need free space. By the way, you can do the same with a battery; if the current Android battery is dead, you can remove it and insert a fully charged one — you can’t do that with an iPhone.

Number of apps
A couple of years ago iPhone users were boasting that the AppStore offers many more apps than Google Play; however, as of today, the situation has changed. You can find many more apps for an Android phone rather than for an iPhone.

OS simplicity and interface
Considering simplicity, the iPhone is a clear winner. Thanks to a lack of advanced customization, the iOS interface is much simpler to use and understand than an Android one. iOS is highly intuitive, and for a person who is not that savvy with modern technologies, it’ll be much easier to use compared to an Android.

Viruses and security
Since any valid apps can be installed on an Android, there’s a higher chance of downloading and installing viruses and malicious software when compared to an iPhone. However, there are no absolute guarantees that an iPhone won’t become a victim of viruses or malicious apps that block your phone.

Price
Thanks to a large number of manufacturers that produce Android phones, the price of smartphones with this OS varies and you can find an Android that fits your expectations easily. Since there are only a couple of iPhone models that you can buy, there are not that many options to choose from.

The Android vs. iPhone battle has been a constant rivalry for several years. In our opinion there’s no clear winner; it’s a personal choice of what device suits your needs better. Our overview will hopefully show the difference between these two OSs to help you select what’s more comfortable to use for you precisely.