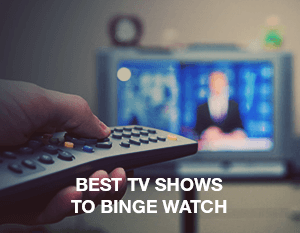 Now, when you know that John Snow is not a bastard, Daenerys is heading to rock Westeros and Arya is doing just fine, there’s a whole year ahead before we get to know what happens next. No need to panic and wonder what to do with your life, as there are more awesome TV series’ you can binge watch to make this year of waiting for the seventh season of Game of Thrones pass by faster. We made a list of multi-season TV shows that can keep you occupied for hours. Take a look at our list of the best TV shows to binge watch.

Breaking Bad (9.5 rating on IMDB, 5 seasons)
All five seasons of Breaking Bad will give you a perfect perspective of the growth of Walter White’s personality and the changes that took place in his and his buddy Jesse Pinkman’s lives.

The Wire (9.4 rating on IMDB, 5 seasons)
A lot of people consider The Wire to be one of best TV series’ ever, as once you start watching it, you literally dive into the battles of the criminal world and the police of Baltimore city.

The Sopranos (9.2 rating on IMDB, 6 seasons)
If know what to do when you wake up this morning, you probably already know how amazing this epic TV show is. It tells the story of Tony Soprano and his life in the mob, his family, and his business associates.

House of Cards (9.0 rating on IMDB, 5 seasons)
The dark side of politics and all the dangerous intriguing twists of the people in power are told to us by the main character Francis Underwood, who is trying to get his part whatever it takes.

Dexter (8.8 rating on IMDB, 8 seasons)
This TV series will make you instantly fall in love with the witty killer catching other killers due to his job and trying to get away with all his crimes.

Better Call Saul (8.8 rating on IMDB, 3 seasons)
This spin-off prequel of Breaking Bad tells us the long and captivating story of a lawyer Saul Goodman and how he became the “Better call Saul” guy we know from Breaking Bad.

Supernatural (8.6 rating on IMDB, 12 seasons)
A long-lasting saga about the Winchester brothers fighting with supernatural creatures, demons, witches, angels, the king of hell, the Darkness, and trying their best to save the world.

Luther (8.6 rating on IMDB, 4 seasons)
The villain from The Wire now becomes an outstanding detective with a rather twisted personality who is surrounded by dark and sophisticated crimes while trying to catch cruel murderers.

The Walking Dead (8.6 rating on IMDB, 7 seasons)
A legendary series showing us the life of a team of lucky survivors trying to survive after a zombie apocalypse. The perpetual fight to stay alive and get to a safer place is intriguing to watch.

White Collar (8.3 rating on IMDB, 6 seasons)
A charming thief and conman, Neal Caffrey, offers his deep knowledge of the criminal world to help his friend-to-be partner from the FBI catch all sorts of scammers and fraudsters.

Castle (8.2 rating on IMDB, 8 seasons)
An interesting story about detective writer Rick Castle using his mind’s abilities and writing experience to help the NYPD to resolve the constant crimes on the streets of New York.

Like anyone else, the Icecream Apps team loves Netflix and chill and binge watches plenty of TV shows. Read about our favorite TV series computer geniuses and share your opinion in the comment section!