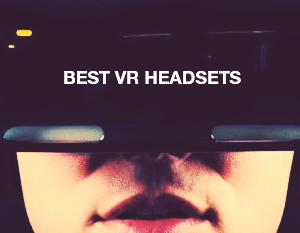 In just a few short years, virtual reality (VR) has transformed from a prospective technology to a fully functional nascent market. Major tech companies have embraced VR with devices called head mounted displays (HMDs): headset devices that act as a gateway between computing devices and the user.
Around these devices, software vendors and developers have created hundreds of games and applications that work in the virtual space. For a completely immersive experience, virtual reality is changing the way in which we consume media and interact with content.
There are dozens of HMDs on the market, but only some of them stand out as the best available. We have listed the leading virtual reality headsets for PC, mobile, and consoles. From tech giants like Samsung, Google, HTC, and Sony, to the virtual reality giant Oculus, the HMDs we have chosen are the topVR headsets of 2018. 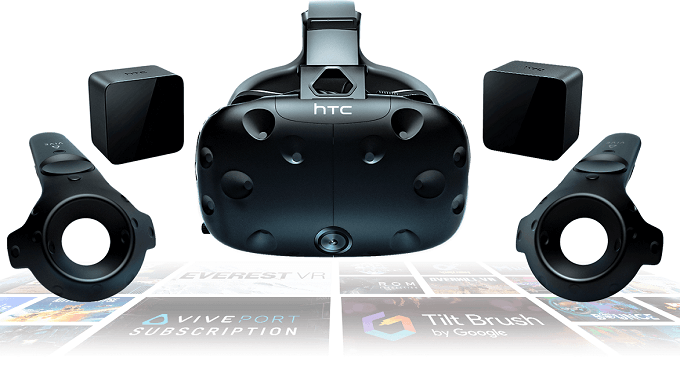 Despite being among the first VR headsets on the market, the HTC Vive remains the most consistent package. It is hugely powerful and comprehensive as it ships with two motion controllers and two base stations. The latter are important additions because the bases allow the Vive to create a “whole room” VR experience.
Despite the presence of powerful alternatives, the HTC Vive is an impressively technical headset which tracks movement within a 10-foot virtual cube. In fact, the room scale tracking of the Vive is still what sets it apart from its main rival Oculus Rift. The Vive has been around long enough that it also gets interesting peripherals, such a Hyper Blaster and Racket Sports Set for shooting games and sports.
However, like the Vive itself, these accessories are expensive at $149.99 each. Cost is definitely the Achilles heel of HTC’s HMD, and many people will find the $600 price tag too much to justify. Then there is the fact you will need a high-powered PC to run the Vive, with HTC suggesting a minimum of an Intel Core i5-4590 CPU and a GeForce GTX 970 GPU.
Price: $649.00 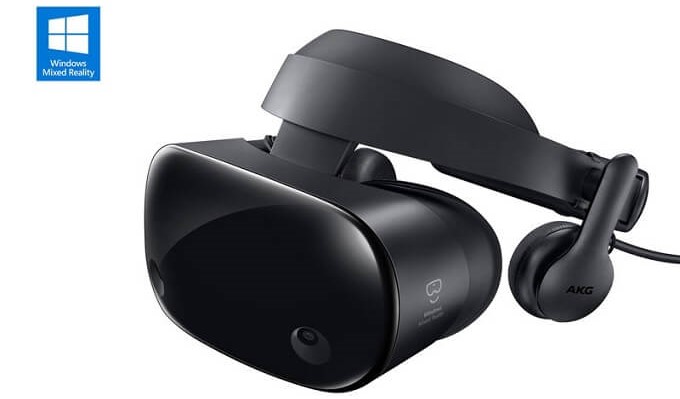 In many ways, Microsoft’s Windows Mixed Reality platform is a direct response to the expensive and specification-demanding HTC Vive. Wanting to make VR and MR more accessible, Microsoft created Windows Mixed Reality, which puts less processing burden on headsets. This means users can run VR content and games without needing blistering hardware.
OEMs have backed Microsoft’s vision. Acer, ASUS, Lenovo, HP, and Dell are among the leading PC vendors who have embraced Windows Mixed Reality. The headsets released by these companies are almost identical in terms of specifications and are priced between $400 and $450. However, Samsung also entered the market with the Odyssey, which stands out as the best Windows-based VR hardware.
The most premium Windows MR device yet, the Odyssey costs $499, which is still more affordable than the Vive. The device is an OLED head-mounted display with a 1440 x 1600 pixels per eye resolution. In terms of resolution, this is an improvement on the 1440 x 1440 resolution of existing Windows MR headsets.
However, unless you desperately need that extra display quality, you could save money and buy a more affordable Windows-based device.
Price: $599.00 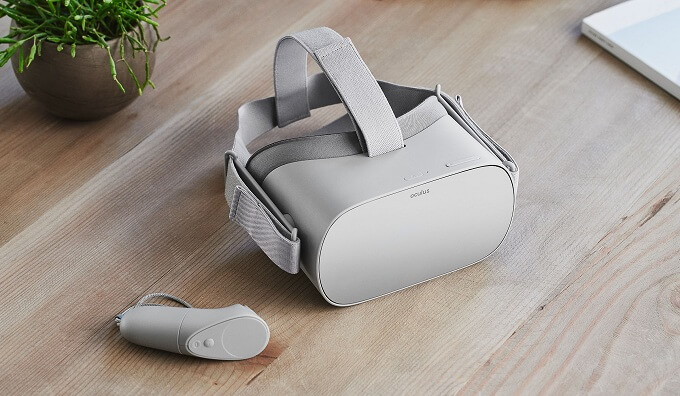 In many ways, Oculus Rift is the trailblazer of the virtual reality headset market. The company was at the forefront of hardware development thanks to founder Palmer Luckey, who developed the first prototype as a teenager. Since then, Oculus was acquired by Facebook for $2 billion and remains one of the giants of VR.
Since those humble days, Oculus Rift has been upgraded with motion controllers, a significant reduction in price, and more. As one of the first HMDs on the market, Oculus Rift is supported by a strong ecosystem of games and VR content. We probably favor the room-scale capabilities of the HTC Vive, but the Rift still excels at tracking, albeit in a more linear manner.
Like the Vive, Oculus Rift is also limited by a reliance on high-end hardware, but is now competitively priced against Windows Mixed Reality devices at $399.
Price: $419.99 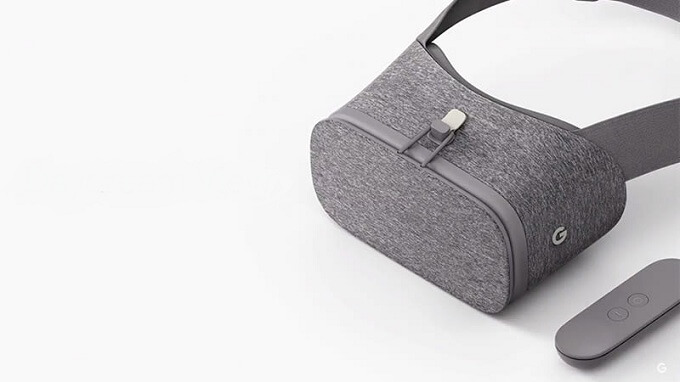 Google has been dabbling in the HMD market for some time with its Cardboard headset. Made of cardboard, we love the $20 device, but we don’t think it warrants inclusion on a list of the best available virtual reality headsets. However, Google does have another HMD that is well worth consideration, especially for mobile VR at an affordable price.
The Daydream View is the most affordable headset on this list at just $99. Of course, for that low price there are some limitations. Namely, this is a pure mobile HMD, which means it will not work tethered to a PC. As a result, you won’t get blazing graphical fidelity and high-quality content.
That said, mobile virtual reality is also taking off in a big way, with developers embracing content creation for functional apps and high-concept games. Of course, Google controls Android, so the Daydream View can access thousands of VR apps by placing their smartphone within the headset.
Price: $99.99 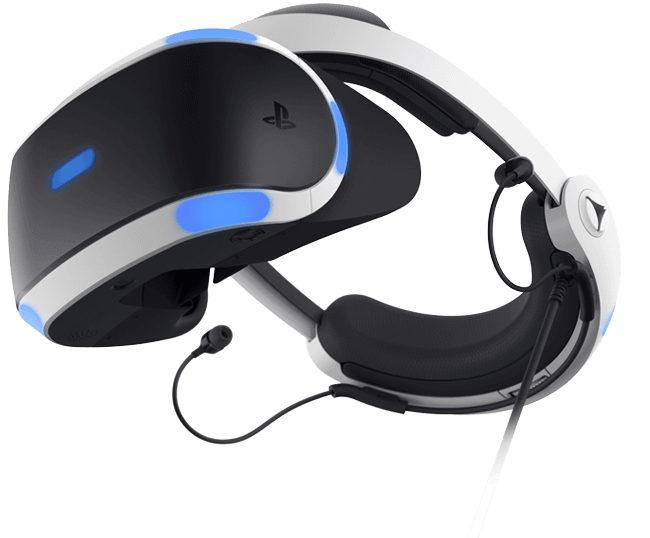 While Oculus Rift, HTC Vive, Daydream View, and Windows Mixed Reality are open devices, some companies are attempting to grow in VR through exclusivity. Sony has gone this route with the PlayStation VR, which only works with the company’s PS4 console.
Considering that console has sold over 60 million units worldwide, many people will be interested in PlayStation VR. It’s also worth pointing out that this is one of the few console-only HMDs available as Microsoft and Nintendo have yet to make a move. PCs are more powerful than consoles, but Sony has done an amazing job at making the PlayStation VR an excellent performer.
The device tracks well and the refresh rate is almost as high as on a PC headset. As this is PlayStation, the selection of games is top notch, with literally hundreds of titles to choose from. As a pure gaming headset, the PlayStation VR is hard to beat. However, to use the $200 headset, you will need a PS4 camera and at least one PS Move controller, which are separate peripherals and cost another couple of hundred dollars.
Price: $209 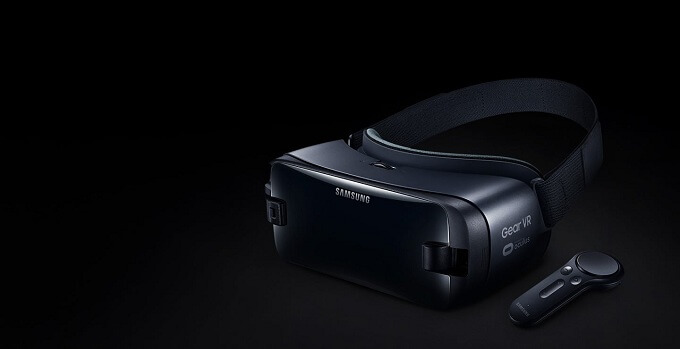 In terms of mobile-specific HMDs, the Samsung Gear VR is the best. Yes, it’s even better than Google’s Daydream View and costs just $30 more. So, why is the Gear VR ranked lower than Google’s headset on our list? Well, unfortunately the device is only compatible with Samsung devices, which is a noteworthy limitation.
That said, Samsung is comfortably the biggest smartphone vendor in the world, so admittedly hundreds of millions of people can enjoy the Gear VR. Still, for those without a Samsung smartphone, the headset is useless.
Users who do own Samsung handsets and buy the Gear VR will get a powerful mobile-centric HMD. It is also worth looking out for deals because Samsung sometimes bundles its Gear VR with smartphones for free.
Price: $129.99

It is clear the head mounted display market is diversifying and growing. Consumers now have a clear choice of different headsets for individual purposes. The HTC Vive and Oculus Rift are high-powered hardware that require a tethered link with a high-performance PC. Windows Mixed Reality devices like the Samsung Odyssey bring the PC quality performance for a lower price, and without high-end hardware requirements. Then there are mobile-specific headsets like the Google Daydream View and Samsung Gear VR, both of which deliver excellent VR content on smartphones.
All of the devices presented above are the best choice for a VR headset in 2018, at least right now. The market is changing quickly, and over this year OEMs will be launching untethered HMDs, similar to how wireless earbuds have become widespread and common when compared to headphones with wires. Currently, headsets need a physical connection between the headset and a PC, console, or smartphone to function. That’s because the processing power is provided by the base machine and not the headset.
However, Oculus and HTC have announced standalone headsets which will pack the computing power into HMD, essentially making them individual devices. This will allow untethered movement so users can move around a room more and have improved tracking. The Oculus GO and Vive Focus will launch later this year, while Qualcomm recently opened the door for all VR OEMs to embrace standalone HMDs. The company’s Snapdragon 845 includes the Xtended Reality (XR) platform which supports OEM creation of untethered HMDs.