When working with images you will notice that there are different image file formats such as JPG, JPEG, PNG, TIFF, and BMP. But if speaking about JPG vs JPEG, is there are difference? If you’re interested in specifications of image formats, our article in which we compared PNG and JPG might be interesting for you as well.

Possibly the most recognized, and most used image file format, however, is JPEG. You may have also seen the file format JPG. Are JPG and JPEG the same? Or are they completely different file types? Read on to find out in the below article!

JPG vs JPEG – Is there a difference?

Let’s keep this short and sweet – there is NO difference between JPG and JPEG. They are the same file format and have the exact same characteristics. But why are two different file extensions used? To understand, we have to look back into the earlier days of computing and graphic design.

Originally, some computer systems like MS-DOS 8.3 and FAT-16 could only support a maximum of three letters for a file extension. Hence, JPEG was shortened to JPG image format. This was not the case for UNIX-like systems such as MAC and Linux and they could use the originally intended JPEG file extension.

As time progressed and technology developed, Windows operating systems improved their file extension support and could allow for either three- or four-letter extensions. At this point, JPEG started to be used along with JPG. However, JPG images extension on Windows devices was around for so long, that it virtually became the standard and both JPG and JPEG are widely used today.

So to reiterate – when speaking about JPEG vs JPG, there is no difference – it is simply an issue relating to archaic file extension limitations.

Everything you need to know about the JPG file format

Now that we have cleared that issue, let’s delve into the JPG file format and see what it has to offer. JPEG file format actually stands for the Joint Photographic Experts Group. This is the original sub-committee that worked to create the JPEG image format and standards. The original ISO (International Standards Organization) standard for JPEG was formalized in 1992.

But what is this file format and what does it have to offer? We have listed some main points about JPG in the sections below:

JPG is a raster graphic format

Firstly, JPG is a raster graphics file type as opposed to a vector graphic. Raster graphics are made up of a bitmap which is a huge grid of individual pixels. Each pixel has its own color. If you view these pixels closeup, the image has no form. However, when millions of individual coloured pixels are combined together, they can form smooth gradients, curves, and produce realistic graphics.

In contrast, vector images use maths and coordinates. Mathematical formulas are used to create geometrical shapes, for example. Vector images can easily be scaled as the formulas can simply be changed to reflect different dimensions.

You will often hear the term lossy compression in-conjunction with the JPG file format. Lossy compression means that as the file size of the image decreases, it loses some of its quality. For example, you start with a JPG image saved at 1000x500px. You then reduce this to 900x500px overall size. The overall quality of the image would look less, and eventually, it will look pixelated.

Other file formats such as RAW, PNG, and BMP are lossless. This means that the files preserve all of the original file data and thus image quality is not lost during compression and saving. This is one of the downsides of JPG images, however, it also means that JPG images are much smaller in file size which is a benefit.

JPG is one of the most common file formats next to PNG for web graphics. Web developers and marketing teams will commonly use JPG file formats for their graphics such as website headers, selling images of products, and product thumbnails.

This is because JPG files are usually much smaller in size compared to other image file formats. As a result, they offer much quicker page loading times which is essential for a favourable user experience on websites. Also, despite the smaller file size, JPG images still look great and do not lose much quality via their lossy compression.

You may have also seen the file extension JPEG 2000. It is important to understand that JPEG 2000 is not the same as JPG. It was a standard still created by the Joint Photographic Experts Group; however, it was intended to replace JPG and provide better features and utility.

Developed in 2000, it had improved features such as advanced lossless compression, progressive decoding, and higher compression ratios. It is a great step forward for the JPG file format; however, it has never received wide support. For example, it is not universally supported by web browsers. Also, it requires great computing power to encode JPEG 2000 files.

JPEG 2000 certainly has excellent potential and is the superior file format, however, until it is supported and widely accepted, you won’t see it used much. 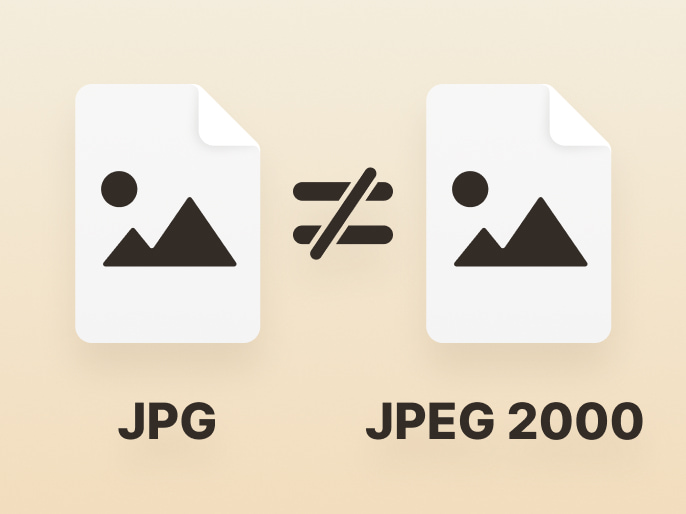 What programs can you use to view and edit JPG images?

JPG is one of the most popular image file types currently used. It also has excellent support from a myriad of different software. Many programs can view JPG images. For example, Windows devices have a built-in photo viewer, and MAC devices also have a native image viewer that can open JPGs. Also, commonly used programs like Microsoft Word and Excel also support JPG files. You can also convert JPG to PDF format in many different ways for your convenience.

In terms of graphics creating and photo editing, virtually all software will support JPG as standard together with a host of other image file formats like PNG, TIFF, and BMP. Examples include Photoshop and GIMP (we recently compared these 2 image editor on our blog: GIMP vs Photoshop, Lightroom, ON1 Photo RAW, and Luminar 4. Essentially, you should never struggle to view or edit a JPG image.

We hope you have found this guide useful. You should now have a clear understanding of JPG vs JPEG question – they are the same file format just with a different extension due to original technological constraints. Operationally, JPG uses lossy compression, is a raster graphics file type, and is supported by a huge range of programs and graphics editing software.