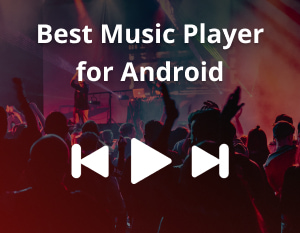 In the age of Spotify and other music streaming services, having a huge collection of songs saved on your phone isn’t as common as it used to be. That’s when a music player for Android comes in handy if you’re on a relevant mobile OS of course.

There are hundreds of both Android music player apps out there. But that doesn’t mean all of them offer the same experience. What do you do when you have gigabytes of music already saved on your phone? What about when you are going out of town and won’t have reliable internet to stream music? Our readers deserve a smooth, customizable and feature packed experience when listening to their favourite songs. So, we’ve reviewed and picked out the very best music player for Android apps.

Musicolet Music Player is the ultimate no-frills music player for Android. It’s rich in features without overwhelming the user and has a simple minimalist design that will appeal to most people.

Musicolet Music Player is completely offline, ensuring that users don’t have to worry about their privacy or about having to stay connected to Internet at all times. If you’re however still worried about your safety, check our review of the best antivirus for Android.

Musicolet Music Player supports almost all audio formats, including .flac, .mp3, .mp4, .mpeg, .wav, and more. A full list of the supported audio formats can be found in this Android music player itself. The app automatically scans your phone for all music files and allows them to be sorted in various ways such as by albums, artists, etc with just one tap. Users with large music libraries will also find the custom tagging system extremely useful.

Poweramp is perhaps the most powerful and feature-rich music player for Android. It offers users a huge array of tools to ensure that the audio they are listening to is the highest quality possible. For power users and audiophiles, Poweramp is definitely the best music player for android.

Audio resampling, smoothing, dithering and other functionalities are available from within the Poweramp Music Player. If users want to do more extensive audio editing, this Android music player provides a companion Equalizer app. While the number of options can be overwhelming at first, it offers users unparalleled control over their audio. Poweramp does not skimp on UI customization either, offering a wide variety of themes and the ability to automatically download artist images and album covers.

Another advantage of Poweramp is connectivity. With Google Assistant, users can control Poweramp with voice commands. Music player for Android lets you connect to other devices such as a TV or a Stereo system using Google Chromecast.

BlackPlayer is a minimalistic music player for Android with a focus on allowing the user to freely customize their experienced as they want. BlackPlayer has built-in equalizers, virtualizers, boosting and sound balancing to ensure that the listening experience is as good as possible.

In BlackPlayer, you can customize the user interface with both light and dark themes, a range of colours and fonts. The widgets are also highly customizable with options such as different themes, floating windows, transparencies, transition effects, etc. BlackPlayer music player for Android also has sophisticated searching and library customization options, letting the user decide everything from the size of album and artist labels to setting individual custom colours and images for each album. BlackPlayer is best suited for .mp3 audio files, but it supports most popular audio file formats like .wav, .ogg and .flac.

Most of the features are available in the free version, which has no advertisements at all. The premium version, called BlackPlayer EX, costs $3.49. It has more customization options and receives developer updates faster. If visual customization is important to you, then BlackPlayer might be the best music player for android for you.

AIMP is a completely free Android music player with a solid range of features. It is somewhat old fashioned compared to many modern players, but many users appreciate the simpler approach.

For starters, AIMP does not have an internal file manager or music library. Most other music apps have an internal folder where they store music files for easy navigation. However, AIMP eschews that feature and instead focuses on playlists only. Users can add songs directly to a playlist of ths music player for Android from their phone’s file manager. You can send and receive music files via WhatsApp and its alternatives.

AIMP comes with a full suite of tools to manage songs, such as cross-fading, mixing channels, balance control and equalizers. It supports internet radio and can go online to automatically fetch song lyrics. It also has powerful sharing tools, allowing users to connect to Android Auto (used in Cars), Windows PCs or go online to live stream. If connectivity is important to you, then AIMP might be the best android music player for you.

Actually, calling VLC Media Player an Android music player would be a misnomer. VLC Media Player is an open-source player for all kinds of files, including video files. However, it has plenty of features that make it suitable as a music player as well, such as options for equalizing and compressing audio as well as changing dynamics.

VLC has a simple, easy-to-use interface, excellent performance and specialized options for dealing with music. It is the media player of choice for most PC users, so its natural that many android users choose a program they are already used to.

VLC is well known for being compatible with almost every audio and video file format there is. Many other players have trouble with rare file formats such as .mkv, but not VLC. For users looking for the best music player for Android and the best video player in one package, VLC is our top pick.

Picking the best music player for Android is just a matter of time and your expectations. Luckily, today there are so many apps in the market that can surprise you with their features and interface. To narrow your search you need to define your priorities: price, simplicity in use and available options. We hope that our review will help you with that.