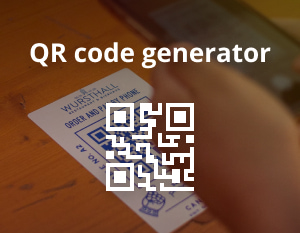 QR codes are an extremely useful and handy way of conveying information. With QR codes, you can compress a lot of data into a small square image about the size of your thumb. This can be perfectly done with a QR code generator.

While QR codes are not usable everywhere, they make things a lot easier and more convenient where they can be used.

For example, you want to share a website’s URL with a group of people you are going to meet physically, such as in a meeting. However, you don’t have all their phone numbers or contact details.

Instead of hunting down those details one by one, you can simply create a QR code. The URL could be included in the code. The other people could take out their phones, scan the code, and open the link without having to type out the whole thing!

It is very easy to convert a link or piece of text to a QR code. Here are our top five choices for a QR code generator. 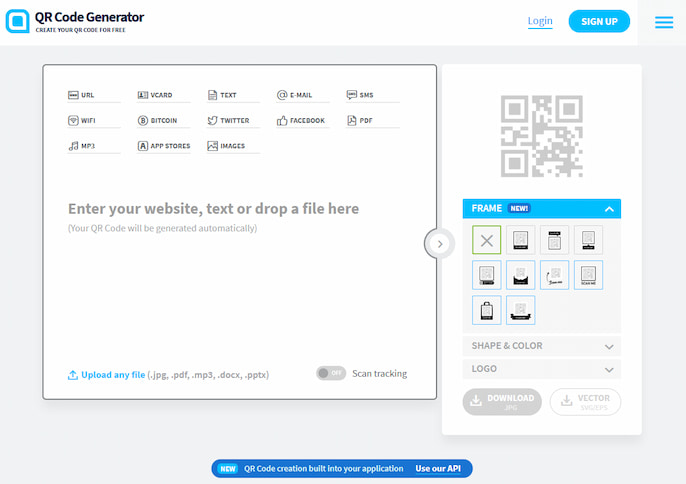 Egoditor’s QR Code Generator is probably one of the most customizable tools to create QR code out there which makes it a great productivity tool. Normally, generating QR code is just a matter of a few seconds. However, you will probably want to spend at least a few minutes on this one.

With Egoditor’s QR code generator, you can embed a lot of different functions into the QR code. You can have it automatically scan and save contact details, redirect the user to a store or to Facebook or Twitter where they can share it immediately.

Plus, this free QR code generator is also quite heavily customizable. The frame, the shape of the small dots, and the overall color can all be edited. Custom logos can be inserted into the middle of QR code as well.

For promoting your brand or a shop, this QR code maker is probably the strongest choice you have. Since the QR code is output as an SVG or Vector, it can be resized with no problems whatsoever. 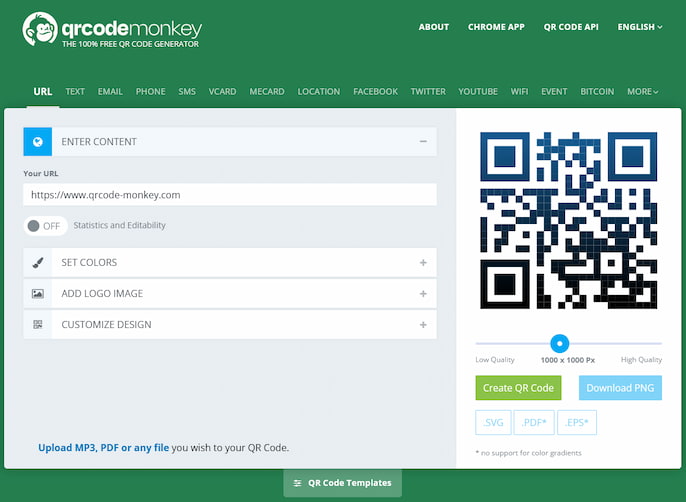 QRCode Monkey is probably the most sophisticated free QR code generator out there. It has a lot more features and a lot more customization options to create QR code free of charge.

Some unique features of QRCode Monkey include the ability to set a gradient color for the QR code. No more boring, flat colors. A gradient color can look amazing and will help the user integrate the QR code into another piece of digital art such as a poster or a brochure using a photo editor of your choice.

Aside from the color, this QR code generator has the widest range of design customization options as well. You can check out their preset templates to get an idea of what kind of themes are possible. The output code created with this QR code maker can be saved in several different formats and sizes.

Just keep in mind that if you make a QR code and customize it too much, some phones might not be able to read it. You don’t want a good chunk of your visitors not checking out the QR code after their phones fail to grab it!

Ironically, this free QR code generator isn’t the most impressive one on this list. It does not have most of the color and design customization features. Nor can you change the logo. However, it does have one thing going for it.

That is simplicity. Unlike other QR code generators, you won’t get distracted and spend 20 minutes focusing on making QR code look great. You can simply enter the content of the QR code, generate it, and be done. There are no complicated options to draw your attention away.

Additionally, this QR code maker also has a QR code reader. This won’t come in handy very often since you can scan them on any phone. But you might be on a laptop or PC when you need to scan one. In this case, QR code generator can use a webcam connected to your computer to read and open the QR code. Here we should note that we strongly recommend having a reliable antivirus before scanning any codes on any of your devices. 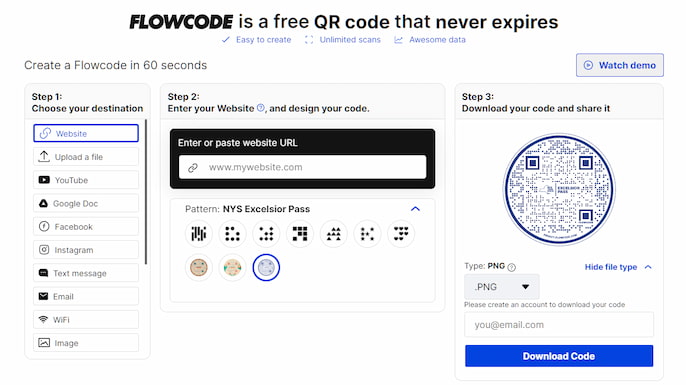 Flowcode is a QR code generator for those concerned with data and aesthetics. They definitely make a QR look good rather than just being a box of randomly dotted squares.

In addition to having as much customization as Egoditor and QR Monkey, this QR code creator offers analytics for free. You can check out how much traffic your code got and try to find out how to improve it.

Flowcode is a free QR code generator that is used by a lot of professionals and large companies all over the world. It is the number one choice for dedicated, professional uses, thanks to the unlimited number of uses.

Aptika is another relatively minimalistic QR code generator. It does not have too many features to distract you, but it does have some more options when it comes to the type of content or the colors.

Otherwise, there is nothing particularly special about this one. If you want a QR code as soon as possible and also to add a splash of color to it, then this one might be a good choice.

QR code generators are great Outlook alternative when it comes to quick information sharing and sending. When you know how to make a QR code, you will be using it over and over again for sure since it’s very convenient.