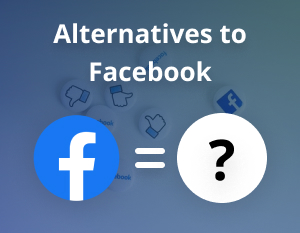 Since recently Facebook became a part of Meta platform, plenty of people started thinking about about possible alternatives to Facebook. Let’s see if we can really find some decent alternative social media to this one.

Ever since it popped out a decade ago, Facebook has been a ubiquitous part of our lives. Nearly everyone you know is on Facebook, or at least used to be.However, there’s an increasing movement of people who are ditching Facebook and turning to alternative social media platforms. There are plenty of reasons for this. A lot of users are fed up with the constant stream of toxicity and advertisements. Others don’t want their personal data to be used by Facebook and now the whole Meta company to make money. Some prefer not to use a platform that allows misinformation and abuse to spread.

That said, it’s impossible to ditch social media and all the apps like Facebook entirely. It’s just too valuable for keeping in touch with other people. If you leave all social media, you will miss out on a lot of networking opportunities and fun events.